A Brief History of the St. Athanasius Church
Arlington, Massachusetts 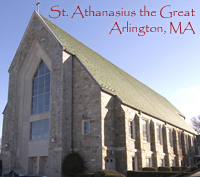 During the late 1940s and 1950s, many young first generation Greek American Orthodox Christians began looking for a place of their own to settle down with their new families. Arlington became a favorable location to call home. They arrived mostly from the nearby cities of Somerville, Boston, Watertown, and Cambridge, where some 40 to 50 years earlier their immigrant parents had established the first Greek Orthodox communities there. As time passed on, and their families grew, traveling back and forth to their parishes was becoming a challenge, in addition to the transportation of their children for after-school Greek language classes and special events.

By the early 1960s, this situation prompted a group of Orthodox residents to look into establishing a Greek Orthodox Church to serve Arlington. After much toil and fundraising work, that notion became a reality on September 9, 1964, when their faith and donations made it possible for the future of Saint Athanasius at 735 Massachusetts Avenue to be purchased.

Over the years, the parish experienced great growth, (about 600%) subsequently outgrowing the church's physical capacity. However, with no practical way to expand the structure, forty years hence, the only option was for the church to leave its original home and either seek a larger house of worship, or find a suitable site for building a new one.

The former St. James the Apostle Roman Catholic Church would become available not long after thereafter, and St. Athanasius' parishioners 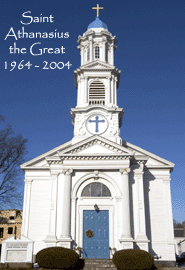 demonstrating a great faith in the task before them, agreed to step forward for this worthy endeavor and acquire the vast church property. In the face of such significant financial odds, the faith and commitment to Church previously exemplified by earlier Orthodox Christian immigrants, thus played itself out once more.

When the final service took place at 735 Massachusetts Avenue on Sunday, November 27, 2005, mixed emotions were evident amongst much of the laity. Ten days prior to that, though, the new church at 4 Appleton Street had already been officially transferred to St. Athanasius. Much of any anxiety and concern, nevertheless, was quelled when the first services at the new church began being celebrated, commencing on Saturday, December 3, 2005.

The parish, now located in its inspiring new edifice, is looking forward to many more years of Orthodox Christian ministry.

Read about this great saint